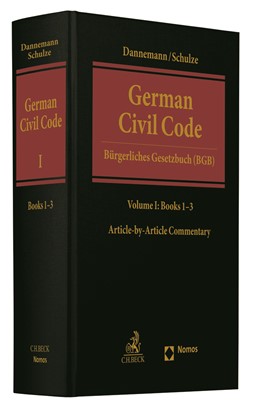 This is probably the first time that a commentary on the German Civil Code of 1900 has appeared in English. However, there are reasons for this. In particular, it has become apparent over the past 120 years that this codification has been received in numerous other countries, for example in competition with the Swiss Civil Code, which is similarly influential.

Today’s text of the German Civil Code has only a limited connection with the text of the law of 1900. This law has been amended many times and has been amended more and more in the last 20 – 30 years. Not least under the influence of the directive law of the European Union, but The Bürgerliches Gesetzbuch in the version as from 2 January 2002 is the very backbone of German civil law.

This will not change in the foreseeable future. The new commentary is also an invitation to scholars, practitioners, and students in all countries where English is practiced as the language of scholarship to take a closer look at the development of German and European civil law.

This commentary is published in two volumes. The volume comments on the first three books of the BGB, i.e. the General Part as a German speciality, the Law of Obligations and the Law of Property. In 2020, the second volume will follow, commenting on family law and the law of succession. The special feature of the law of succession is that this book still contains considerable parts that correspond to the original text from 1900.

This new commentary is a very impressive and groundbreaking project, presenting the BGB in today’s lingua franca.

Even the translation of the BGB is a challenge. In particular, the General Part of the BGB works with sometimes highly abstract language constructions that are not easy to translate into other languages. To enable basic research here, the German legal text is presented with the English translation before the explanations.

The difficulty for the English-speaking reader, however, will be in the footnotes. The commentary often focuses as leading cases of the Federal Supreme Court on the respective norms, but these are relatively difficult to obtain in English-language versions, unless one uses certain tools that facilitate this.

However, the explanations are consistently geared toward an English-speaking reader. All explanations concentrate on the essentials and set convincing emphases.

The commentaries are predominantly structured in the same way. They first explain the function of the respective norm, then go into the norm’s purpose, and then explain the features of the facts with reference to the relevant case law and the leading German commentary literature. The explanations are written in a very comprehensible manner without simplifying complex rules, which is evident, for example, in the explanation of Section 249 of the German Civil Code, which deals with the branching casuistry in a very clear manner.

The institutions and principles of the german BGB are essential for the understanding of the law of Europe’s major legal systems.
In its first edition, this article-by-article commentary covers books 1 to 3 of the code, i. e. General Part, Law of Obligations, Law of Things. The commentary provides a consolidated version of the BGB.

The commentary of each article is headed by the current version of the article both in the German original and an English translation followed by a clearly and uniformly structured analysis of the provision. Focus is laid on the understanding of the meaning of the provision in the context of the code and the proper use of the terminology both in German and English. As the meaning of the BGB does not always follow from the wording of its provisions, especially if translated into another language, they need further explanation. Taking into account the origin of the BGB in 19th century Germany and the difficulties inherent in any legal translation, the proper use of terminology is the real challenge of the commentary.

Facing this challenge, the commentary meets the expectations both of German and foreign lawyers by providing the proper terminology and explanation in English to lawyers and translators and by offering a systematic overview on the BGB to lawyers who are not very familiar with the German civil law.

For the first time, all the norms of the first three books of the Civil Code are annotated here, article by article, in English. The explanations are very clearly written.

The new commentary is interesting for anyone who understands English and is interested in current german Civil Law.